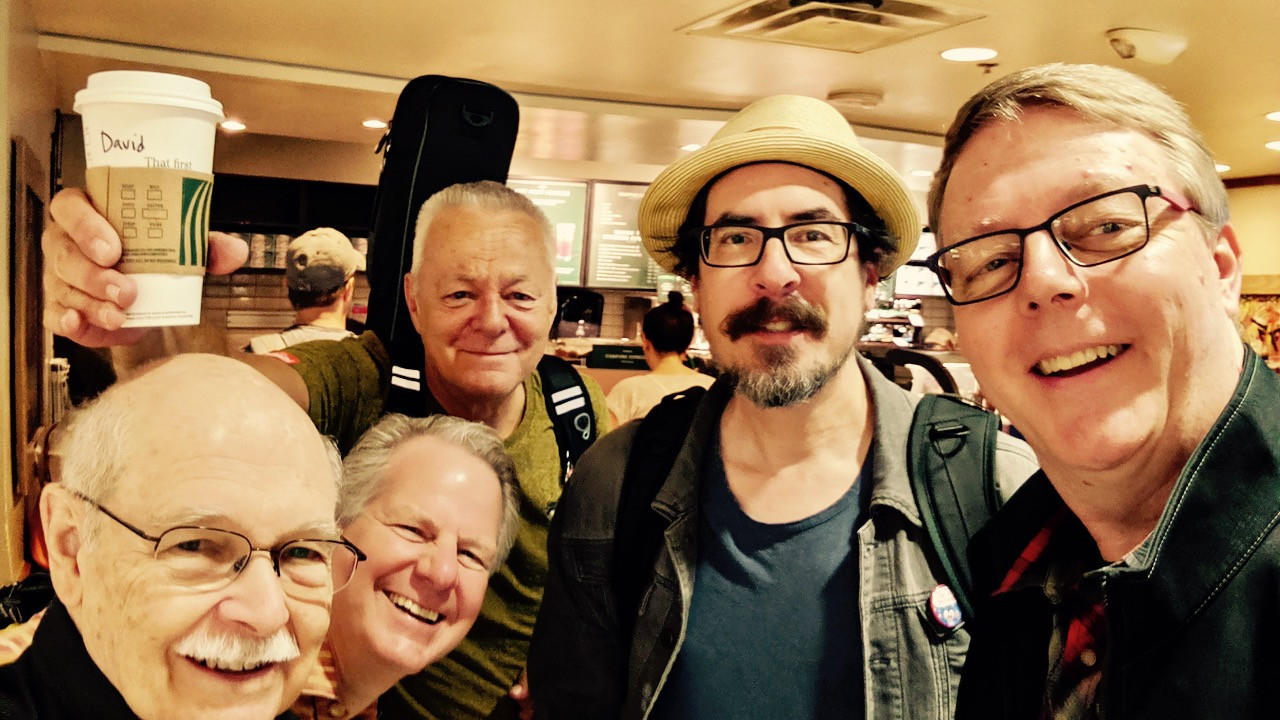 I met John Knowles, C.G.P., when I was maybe 23 years old, so we've known each other a long time. For the past ten years, he's been telling me to come check out CAAS – the annual meeting of the Chet Atkins Appreciation Society, also known simply as "the Chet convention." This year, I finally took him up on it. I called my buddy Jan and said I was thinking of going, and soon he was scheming to make his first CAAS trip too. It all had the makings of a guitar-nerd caper flick – what could possibly go wrong, putting 800 fingerpickers in a Nashville hotel? I booked a plane ticket, mailed in my registration and sat back, waiting for the fun to begin.

The Chet convention is all about fingerstyle guitar, or as the devotees of that particular school of playing call it, "thumbpicking." Here's the short version: about a century ago in Muhlenberg county, Kentucky, a handful of guitar players with names like Mose Rager and Ike Everly shared their licks with a young picker named Merle Travis, who went on to become a country songwriter and hitmaker as well as, oh yeah, the guy who brought Kentucky style thumbpicking to the rest of the world. Merle Travis' deep, soulful groove, grounded in an alternating-thumb approach, created a rock-solid boom-chick bass with a powerful chordal backbeat on the middle strings. Equally effective on both electric and acoustic guitar, this left him free to simultaneously craft swing-inflected melodies on the high strings, all of which he somehow accomplished using just his thumb and index finger. He used this style to accompany himself on traditional material and a string of incisive and witty original songs, and to create classic barn-burning instrumentals like "Cannonball Rag" and "Blue Smoke." And not only is he the man "Travis picking" is named for, he's the guitarist who inspired Chet Atkins himself to become a picker, which is a little like being the guy who inspired Moses to do that thing with his hands at the Red Sea.

Chet added a right-hand finger or two to Merle's technique and proceeded to spend the next few decades exploring every conceivable way to expand the electric guitar's potential, from cascading string-crossing licks and false harmonics to creative uses of then-new gadgetry like tremolo and delay. As his role and reputation grew, he became a magnet for other gifted guitarists, gladly extolling their own innovations and freely absorbing new ideas and techniques from them. Jerry Reed and Lenny Breau both travelled this two-way street of inspiration, as did John Knowles, who probably knew Chet's music better than Chet did and co-wrote and/or arranged much of Chet's later material.

While it's Chet himself for whom the convention was founded and in whose name the assembled have officially gathered, the proceedings reflect the profound influence of Travis, Atkins and Jerry Reed as a triumvirate of repertoire and approach. Merle's groove looms large, while his hot instrumentals still provide a litmus test for anyone seeking to prove their chops. Chet himself, of course, left behind dozens of tunes and arrangements that form a core repertoire for the aspiring fingerpicker. In particular, Chet's versions of prewar standards like "Avalon" and "I'll See You In My Dreams" provide common ground for the thumbpicking scene in much the way classic Bill Monroe repertoire does for bluegrass picking circles or the Willie Dixon songbook does at blues jams. Which is good, because it turns out that, despite the self-sufficiency of the fingerstyle approach, talented thumbpickers love to jam. And Jerry Reed left behind a handful of equally ubiquitous compositions: bluesy, sycopated, immensely appealing yet tricky instrumentals like "The Claw" and "Jiffy Jam."

But it's the ripple effect of all this that quickly becomes apparent at CAAS. Chet was extraordinarily influential in his own lifetime, and while the country music scene he emerged from is long gone – in large part, some would argue, due to his own efforts as a producer to mainstream and popularize that very music – step into the lobby of the Music City Sheraton in the second week of July and you begin to appreciate just how far the sounds of Merle, Chet and Jerry have continued to travel and evolve since Chet's passing in 2001. Tommy Emmanuel, in particular, is the reigning personification of post-Chet fingerstyle, with the same kind of shattering impact and out-sized influence Jerry Douglas and Tony Rice had on the worlds of resophonic slide and flatpicking guitar, respectively, a few decades back. Like Jerry and Tony – or Chet and Merle, for that matter – Tommy has already passed into the realm of one-named artists, as in "Tommy's got a really amazing version of that," or "Oh, your friend's into fingerstyle? Have you turned him on to Tommy yet?" Emmanuel's influence on the next generation is already on full display at CAAS, in the playing of take-no-prisoners virtuosos like Joe Robinson, Shane Hennessey and Brooks Robertson, each of whom is less than half Tommy's age and all of whom appear to have spent their formative years ingesting Tommy and Chet records whole instead of wasting time studying for the SATs.

All of which is fascinating to see and great fun to hear, but this 21st century wing of the party is still balanced out by all the other immensely talented musicians who descend on CAAS to play, hang out and connect. There are folks like Jim Nichols, as adept at recreating Chet on a Gretsch as he is at burning through the changes, and my old pal Pat Bergeson, who, in addition to backing up the master on guitar during the last several years of Chet's life, can also play more bebop on a single diatonic harmonica than I ever will using all six strings and an espresso IV drip. I heard Thom Bresh sing not one but two sets of deeply grooving, heartfelt and hilarious tunes on the big stage and witnessed Guy Van Duser tearing through four or five hair-raising choruses on "Wolverine Blues" in a standing-room-only workshop.

I've been playing fingerstyle since I was twelve, thanks to my first guitar teacher, Lucille Magliozzi, who taught me fiddle tunes and picking patterns when my friends were working on "Eruption" and "Sunshine Of Your Love." But as a kid, if they didn't have it at the local library or play it on one of the college radio stations, I didn't hear it. So, Ry Cooder and Dave Van Ronk and early Dylan and John Hurt, check. Travis, Atkins and Reed? Not so much. Since I was terrified to sing, and I had some basic mechanics down, it seemed logical to try and make the melody go while the thumb did its thing. And I did have Richard Saslow's The Art of Ragtime Guitar, whose nine original tunes I inhaled around the same time.

As a result, I was able to put a kind of approach and repertoire together, but without any key thumbpicking anthems like "Windy and Warm," "The Claw" or "Goodbye My Bluebelle." Eventually, of course, between the CD reissue boom of the 1990s and the now nearly absurd online availability of anything ever recorded, I've been able to fill in the gaps. But it's the material you learn when you're young, ravenous and have plenty of disposable time (see Robertson, Hennessey and Robinson above) that forms your musical identity, so for better or worse, I'll probably never have those thumbpicking tunes burned into my psyche the way I do John Hurt's "Richland Women Blues" and Ry Cooder's "Tamp 'Em Up Solid."

And yet. As picker after picker got onstage to do their thing, when the Chet and Merle and Jerry Reed things came along, it was like meeting far-off aunts and uncles and cousins you've heard about but never spent time with before. Whether it was people playing Chet arrangements of "After You've Gone" and "Indiana," Tommy pulling out Merle Travis' "Saturday Night Shuffle," or various and assorted versions of Jerry Reed's "Jiffy Jam" and "Blue Finger," the bedrock thumbpicking repertoire felt deeply familiar. Seeing and hearing people play this music, I didn't feel like I was encountering something new. I felt like I was hearing a perfectly realized version of something I'd suspected all along. At first, I was really perplexed by this, but now I have a theory, and it goes like this.

Growing up, learning to play, I may not have had the right guitar records, but I did have a fascination with American roots music, and spent my time listening to and learning as much about blues, bluegrass, ragtime, honky-tonk, Western swing and swing as I could. And so, between working out the right hand coordination to play John Hurt and put melodies over a bass, hearing my father and grandfather play Tin Pan Alley tunes on the piano, and soaking up the music of Duke Ellington, Benny Goodman, Charlie Christian and Django Reinhardt, I was, in an incredibly unlikely way, swimming in surprisingly similar waters to those Chet swam in as he was learning and developing his sound. Similar but not identical, because, after all, one of us grew up to be Chet Atkins and one of us didn't. But still, when I look at it that way, it's no longer a mystery why Chet's application of Merle Travis' blues-inflected country picking to the pop and swing material of the 1930s and 1940s sounds not just familiar to me, but like turning a corner and realizing you were practically home all along and didn't even realize it.

Good thing they hold CAAS every year. Having waited so long to go the first time, I won't be making that mistake again.