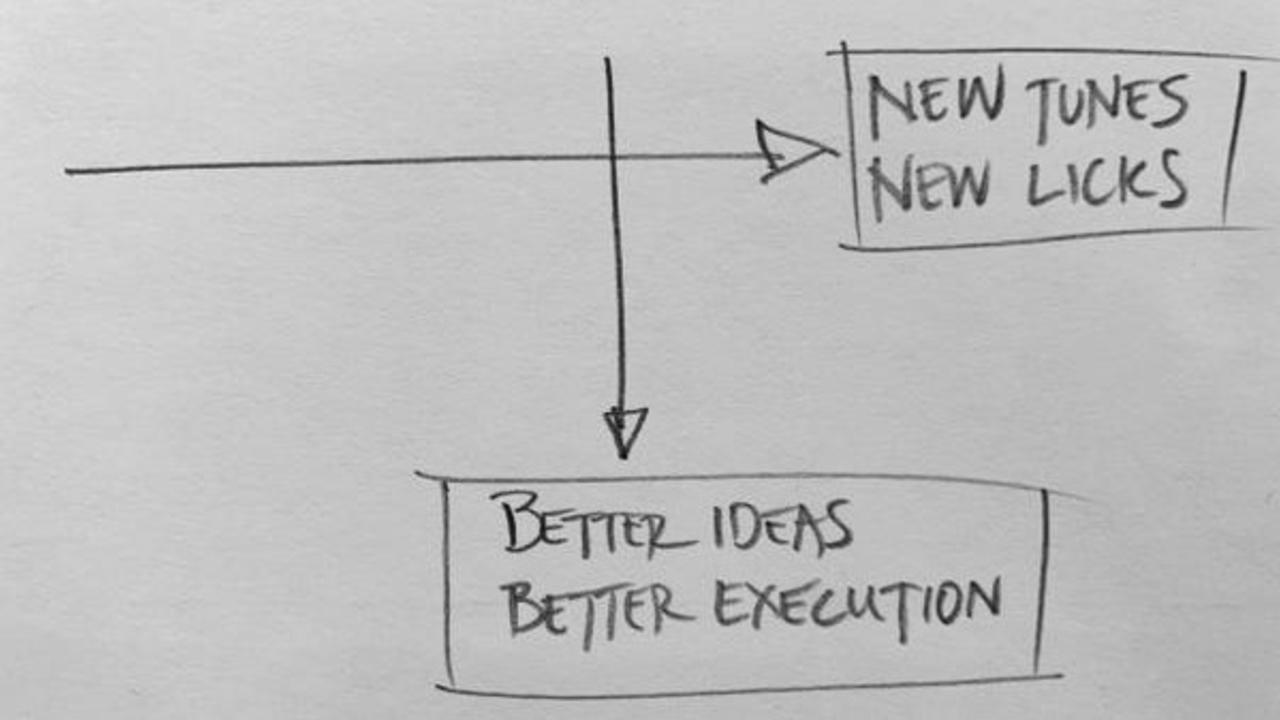 I've been thinking about Thelonious Monk this week, specifically an observation I once read about his repertoire. Unfortunately, I don't remember exactly where I read it. It may have been in Martin Williams' book The Jazz Tradition, which I've just discovered has been through various editions over the years and the existence of which, it turns out, is not my own personal discovery by a long shot. In essence, Williams – or whoever it was – observed that Monk played through the same relatively small handful of original tunes throughout the length of his career.

I love this idea, because we tend to think that artistic vision as singular as Monk's goes hand in hand with sprawling productivity. Picasso's endless and ever-shifting output, Haydn's hundred-and-something symphonies, fifty years of Peanuts strips. But here's Monk, considered one of a handful of genuine jazz composers of the 20th century, the creator of some of the most iconic standards of the repertoire – "Round Midnight," "In Walked Bud," "Ruby, My Dear" – with just over 60 tunes to his credit. Williams – if it was indeed Williams – notes that this relatively finite stash of tunes is what Monk drew on throughout his professional life, in various incarnations of his quartet, as solo piano recordings, in big band settings.

Monk played standards too, and his refractive interpretations of the Great American Songbook reveal as much of his musical personality as anything else he did. (Highly enjoyable footnote: I'd never heard "Bright Mississippi" before writing this post, and what do you know – it's Monk's take on the changes to "Sweet Georgia Brown." That's called a contrafact, kids – write it down.) But this idea of making the most of a particular repertoire is, I think, one worth looking at. Because it raises the notion: when is it time to go wide, and when should you go deep?
When you sit down to practice, you could work on something new. You could learn a new tune, work on a new arrangement, transcribe a new lick. Or, you could go deeper on something you already know. This is a delicate balance: of course, you always want to be moving forward. And learning new things is a big part of what I most enjoy about music. As my friend Bret says, "As long as I'm learning something, everything's cool." Or as I say: If I'm not learning new things, I get cranky. (Just ask Ms. Fretboard.)

So for a moment, let's call learning new things a horizontal process. You're moving into new territory, exploring new material and ideas. All good, and plenty important. But learning has a vertical axis too: the effort to deepen your understanding of things you already know. So, tunes you can already play, scales you're already soloing with, the things that already feel familiar. Your "Round Midnight" and "Crepuscule With Nellie." You're aware of  which songs you've been playing forever – how well do you really know them? Is there more you can do with them?
For years, I had a couple of arrangements I would pull out at workshops, in private lessons, or just around the house. I'd worked out the tunes "After You've Gone" and "Idle Moments" – just because I liked them and wanted to play them myself. But all I'd worked out was the head – I knew how to play the melody over the chords, and that was about it. So I finally decided, well, what I really want to be able to do is play a tune like that, and then improvise on it, while still keeping the boom-chuck going.
Just articulating exactly what I wanted to be able to do was a significant step, but built into that articulation was this idea that instead of necessarily creating more one-chorus settings of cool tunes, I would try and deepen what I could do with the ones I already knew. To go vertical, rather than horizontal, at least for a while.
So here's the question (okay, three questions):