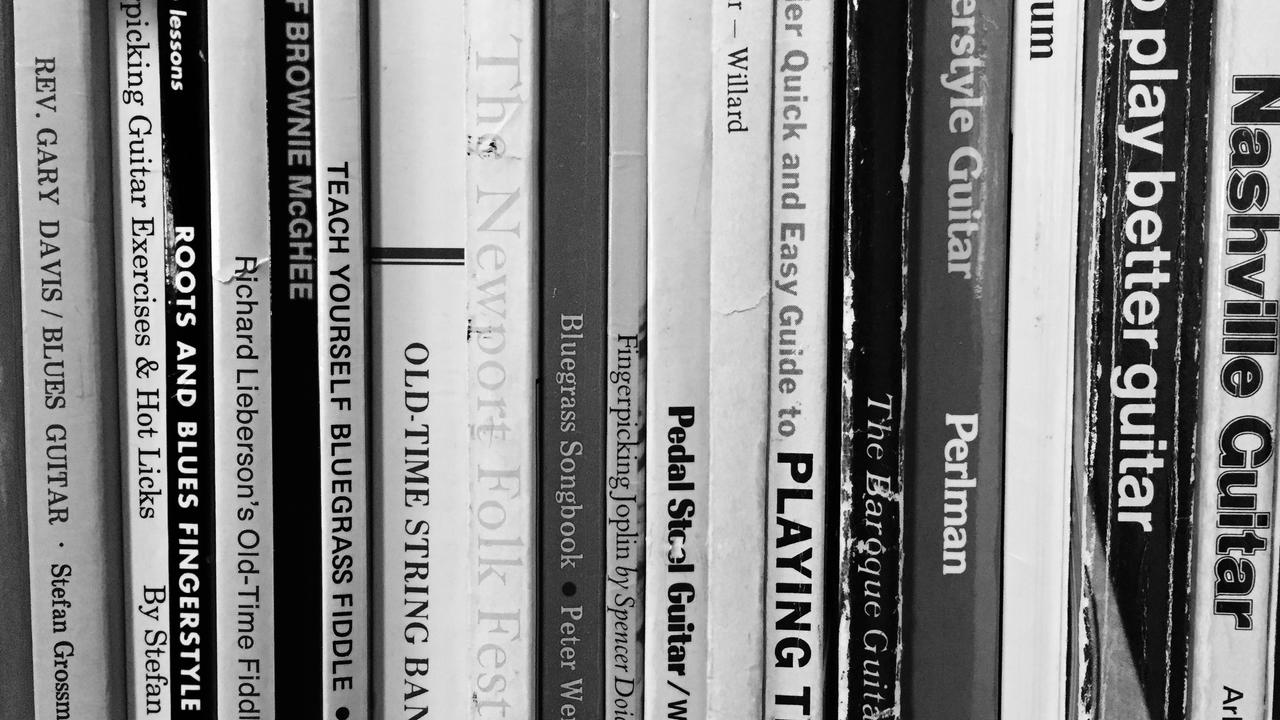 My old friend Paul dropped me a line this past week to ask about books on fingerstyle blues guitar. It seems he's got a student who's worked her way through all of my Fingerstyle Guitar Method book and is looking for what to do next. I wrote back with a handful of opinionated recommendations, realizing by the end of my message that this topic might be of more general interest as well. Although I use the phrase "general interest" advisedly. I played a show on Saturday night with a couple of songwriter friends of mine at Threadgill's here in Austin and after the show someone was nice enough to mention that she had been enjoying receiving my weekly emails. By her own description, she's more of a fan than a musician, so she tends to focus on the verbal buck and wing dance and just skim the guitar nerdery. Which is ok with me – it's an honor just to be nominated, and if someone's who's not even totally hung up on how to the play the guitar wants to know what I have to say, I couldn't be more, as they say here in Texas, tickled about it.

That said, right now I'm going to cut to the chase with a cover version of my own email to Paul from last week. Here, for any of you in search of in-print fingerstyle resources, are a half-dozen recommendations, with relevant annotations, asides and caveats mixed in among the links.

Ken Perlman – Fingerstyle Guitar
First up: depending on what you're into stylistically, there's Ken Perlman's Fingerstyle Guitar, with a nice mix of folk, Celtic, ragtime and Travis-style blues. It doesn't, last I checked, come with audio, but the arrangements are crystal clear and progress quite nicely from simpler to much more complex. And with all the complete tunes included, you can jump around from style to style or work through from the beginning and pick up plenty of techniques along the way. I've used Pearlman's rules for right hand finger assignment since I read them as a kid:

Richard Saslow – New Art of Ragtime Guitar
For bluesy ragtime that totally rocks, there's Richard Saslow's Art of Ragtime Guitar - I learned all these songs as a teenager, and judging from the online reviews, so did a lot more people than I ever imagined – I thought this book was my private property at the time. These are Saslow's original tunes rather than transcriptions of Scott Joplin or Jelly Roll Morton, but they're so light on their feet and musically satisfying it doesn't matter:

Stefan Grossman – Fingerpicking Hot Licks and Exercises
If you can work with the idiosyncratic-looking tab – and it really helps if you do so in conjunction with the original recordings, which was a much trickier proposition when I first encountered these books than it is now – there's Stefan Grossman's Fingerpicking Exercises And Hot Licks - probably best as a supplementary text, and particularly if you're into blues. There are a lot of tunes in the second half of the book, but the first half includes a number of short exercises and licks, each one meant to illustrate a particular technique for playing blues. Because they're short and digestible, it's less daunting than taking on a whole tune right away, and working through even a few of them provides insight into some of the trickier aspects of the more sophisticated (read: Gary Davis, Blind Blake, etc) branches of the prewar blues family:

Happy Traum – Guitar Styles of Brownie McGhee
And then, more fundamental but really intuitive and helpful, I think, is Happy Traum's book on Brownie McGhee. I didn't encounter this book until much later, and I wish I'd seen it sooner, just because it takes some very simple ideas in keys like E and A and shows you how to groove and make a little music without getting into the weeds of a bunch of artist-specific licks or mountainous repertoire challenges. It appears to be only marginally in print and so may be a little hard to hunt down but I wanted to include it here for what it covers.

Steve James – Roots and Blues Fingerstyle Guitar, Fingerstyle Blues Songbook
Steve James has a couple of books from our mutual pals at Acoustic Guitar, mostly tunes, pretty sophisticated but formatted in a way that will be pleasingly familiar to any reader of the magazine. While very tune-focused, Steve does a fabulous job of putting these songs in their historical and music context, and takes a broad view of what constitutes the blues guitar repertoire. That, of course, speaks to me even though Steve and I no longer do – ever since he left Austin for Seattle for several years ago we don't run into each other at the swimming pool in Travis Heights like we used to:

Señor Fretboard – Acoustic Guitar Fingerstyle Method
Finally, there is indeed the book I did for Acoustic Guitar, designed for someone who's just gotten some basic pattern picking together and wants to begin playing some simple melodies on top and get into some basic steady-bass blues as well. The best part – and I can't take credit for this, because it was the publisher's idea, and a really good one, at that – is that there are sidebars for each tune recommending a few historical versions to check out along the way. Plus the book is organized a lot like the lessons in the magazine, with a handful of short, digestible exercises leading up to a complete tune using those very techniques you've just learned:

That's it for now. I'm beginning to cross-post the weekly letter on my site, so if for some crazy reason you want to share with anyone, you can use the link below. And if you've got a favorite book of your own to recommend, be sure to chime in in the the Comments section below the post.